BritishV8 2010: Hanging Out in the Parking Lots of Indianapolis

Simply hanging out in parking lots is a big part of the fun. We kick tires, tell stories, and swap lies. We sometimes swap keys and go for test rides. In the evenings when the engines go quiet, we share and drink our favorite beverages. For most of us, I'm told, BritishV8 meets are the biggest and most anticipated social event of the year. All year long, working in our own garages, many of us are looking forward to hanging out in parking lots.

A parking lot pizza party kicked off our meet this year. Steve Carrick of Advance Auto-Wire and Ted Lathrop of Fast Cars Inc., arranged for a very tall stack of hot pies. As is traditional, we quickly devoured them. A good time was had by all!

In the photos below, you'll see more cars than people. I selected them to show a broad cross-section of cars. I regret that we failed to take enough photos of some really exceptional cars. Some of the car's we did capture well are shown more fully in other articles. If you want to see more photos of people on this website, send them in. Many of the photos in our BritishV8 2010 articles that show people having fun were taken by our good friend Artie Clark. (He has a gift for people photos!) When I'm snapping photos, they're usually of stationary shiny objects because that's what I feel more comfortable doing. Just trust me, the parking lot was much busier than you'd know from my photos.


Preparing an MG for Battle in SCCA's Tough GT2 Class

Phil Leonard's MG RV8 race car has been built to compete in SCCA's GT2 class. To be clear, GT2 is not a
production racing class. GT cars generally resemble specific production cars, but they typically have custom
tubular frames with lightweight body panels clipped on. GT2 rules allow full-tilt racing suspensions and brake
systems. This is a big development. No MG has ever raced in any SCCA GT class before!

Phil petitioned SCCA to add the MG RV8 and MGB GT V8 models to the list of approved cars for the GT2 class.
After SCCA agreed, their next step was to list approved and prohibited specs for both models. This is normal; it's
SCCA's way of making very different cars competitive. In the case of the MG RV8, the specs are tough. The rules
limit an RV8's engine displacement to 215cid (3.5L) even though 241cid (3.95L) was stock. The later-model Rover
spec of 278cid (4.6L) might be more fair. GT2 Sunbeam Tigers are allowed to run up to 289cid (4.7L). Frankly, it will
take a great deal of development work and probably rule changes to make an MG RV8 competitive in national level
GT2 races, where much of the competition is from sophisticated later model cars and well funded teams. You can't
win if you don't put a car on track. Whether he wins or loses, Phil will always be the man who brought MG to GT2!

Immediately before BritishV8 2010, Phil Leonard learned of the death of a friend. Paying last respects was important.
But Phil had already promised to unveil his MG RV8 race car to friends he'd made on the BritishV8 Message Board.
Phil asked his close friend Robert Maupins to attend our meet in his place, and to trailer the racecar in for display.
I now count Robert as a close friend too, and I'm looking forward to seeing him next year. Based on the what Robert
experienced at our meet, he's now planning an MGB V6 conversion of his own.


Announcement:  a very detailed How-It-Was-Done article about Phil Leonard's unique MG RV8 GT2 racecar will be published in 2011 by BritishV8's sister site, www.BritishRaceCar.com. We took over a hundred photos of Phil's car at BritishV8 2010, but agreed with him that the article should be held up for a short time while it's undergoing a lot of development work. Phil's RV8 has been driven satisfactorily in test sessions but it will have improved front and rear suspension, improved brakes, and a more powerful engine soon. Please keep checking BritishRaceCar.com.

Project Roadmaster: can our crew successfully install a big block Buick in an MGB-GT? Why not! At this year's
meet we fired up the Roadmaster MGB and drove it all over the hotel parking lot. Even as I write this, the
Roadmaster MGB is in Sioux City Iowa receiving the affectionate attention of the expert body and paint men
of Executive Touch, under the direction of Terry Schulte. Rumor has it that the Roadmaster will soon have a
spectacular burgundy and silver paint job, and some trick new body details. In this photo, we see Steve DeGroat
at the wheel and Mike Moor riding shotgun as Carl Floyd spots. The project's Chief instigator, Jim Blackwood,
and others are standing behind the camera as Steve leaves to tear apart some unsuspecting speed bumps.

In Front of O'Reilly Raceway Park 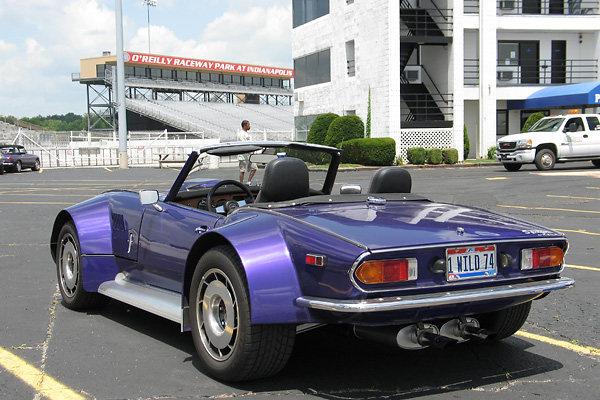 Steve and Paula Ward's 1980 MGB with GM LT1 5.7L V8, and their awesome trailer.
BritishV8 2010 was just one of many stops on a long road trip for the Wards: Fort Worth, Philadelphia,
Montreal, Indianapolis, and more. This snapshot was taken shortly before Thursday's autocross.

Alex Mantell and Pete's 1969 MGB with Ford 302 V8
Rain is no big deal for our crowd, but the deluge that came down on Thursday would've intimidated Noah.
When the storm cut our autocross short, we took shelter under the grandstands at O'Reilly Raceway Park. 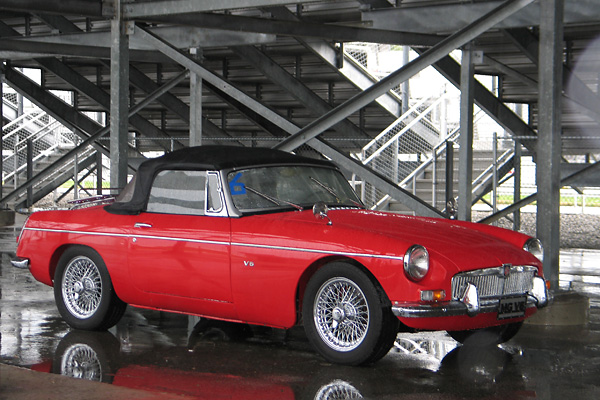 Steve Kimball's 1964 MGB with Chevy 2.8L V6
Steve jumped in this newly completed little rat rod and drove all the way from the southern border of
New Mexico to Indianapolis. No one to caravan with or to share the driving: just one man on a mission.
I'm certainly glad Steve made the trip! I enjoyed meeting Steve, and his MGB redefines "cool" for me.

I don't know all that much about Daimler Darts, so I was pleased that Bob delayed his departure to give me a
brief tour of his mini-hemi. I was especially interested to hear about all the little tweaks he's made to keep
the Dart safe, reliable, and fun for sporting road trips. (Bob drove from Cincinnati to attend our meet.) In this
photo you can spot a modern alternator and a modernized cooling system complete with header tank.

Everyone is welcome at a BritishV8 meet, so long as they share an interest in souped-up British cars.
We were very happy to share our host hotel parking lot with this De Tomaso Pantera and a couple 50s Chevies.

Bob Burge's 1976 Jaguar XJ12 with Chevrolet 454 V8
Bob is another of our long haul drivers. He traveled in style and ease, all the way from home in Wyoming.

Don Haynam of Indianapolis came by in his 1959 Twin Cam (MGA) to see what all our noise was about.

MG put their dual overhead camshaft cylinder head into production a little too soon, and the mistake quickly
proved costly in terms of warranty expense, customer goodwill, and brand reputation. However, Don's Twin Cam
demonstrates that the original design problems were all readily fixable. A very nice example of a rare breed!

The ladies of BritishV8 2010 pause with Carl Floyd for an after dinner photo opportunity.

Disclaimer: This page was researched and written by Curtis Jacobson. Views expressed are those of the author, and are provided without warranty or guarantee. Apply at your own risk.

Photos by Curtis Jacobson and Artie Clark for BritishV8 Magazine. All rights reserved.