"Damask Red" was the second most popular color for the MGB GT V8 model.

Notes:
1) Only navy and ochre trim colors were offered in '73. Only black and autumn leaf trim were offered from '74-'76.
2) Number of cars built in each color was calculated by former MG employee and V8 enthusiast Geoff Allen from MG logs.
Line-built prototypes and show cars are included in the "# Built" column. Development-shop built prototypes apparently
aren't, except for chassis number GD2D2D100G (which is the one flame red car with navy blue interior listed above.)
Geoff also noted that factory employees confused tahiti and teal blue in some cases.
3) Apparently the only paint color that was listed at a premium price was Black Tulip.
4) One special 1975 V8 was built with a two-color paint job, consisting of "New Racing Green" and gold, with black interior.
5) Per Geoff Allen, the factory's "Despatch" office failed to note the color of exactly one rubber-bumper MGB GT V8.
6) The total number of MGB GT V8's is generally reckoned as: "chrome bumper" = 1862 cars, "rubber bumper" = 739 cars.

Enjoying this article? Our magazine is funded through the generous support of readers like you!
To contribute to our operating budget,  please click here and follow the instructions.
(Suggested contribution is twenty bucks per year. Feel free to give more!) 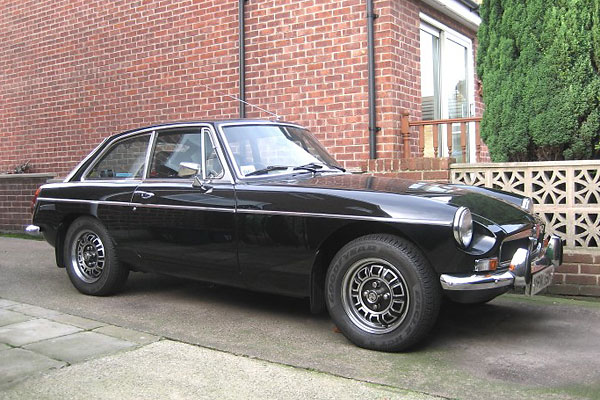 Only about three percent of MGB GT V8's were black.

Limeflower wasn't a very popular color (only two sold!) but it photographed well in black-and-white.
This particular car appeared in many of the original black-and-white MGB GT V8 publicity photos.
Variants of "British Racing Green" (Brooklands & Mallard) weren't popular either - just 33 total -
but this number would have been much higher if the MGB GT V8 had been sold in North America!